I have no idea if this actually is Nordic...some sources call it Viking Bread, which may be even harder to nail down.  I call it GOOD, and make it when I want a hearty, filling bread-like creature.  (No flour, no grain of any kind, no yeast.)

It's not inexpensive to make, but it is a special treat.

Preheat oven to 320 degrees, and prepare a loaf pan by greasing and flouring, or lining with parchment paper.


dry ingredients
wet ingredients
I'm reasonably sure you can substitute any nuts or seeds you prefer, just end up with about the same amount.  I've made it without any sweetener and fruit and it's still delicious.

Bake for one hour or until knife inserted comes out clean. 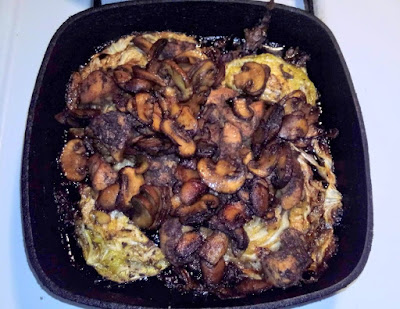 I made this recipe up many years ago, I think--30 at least, so I could have forgotten where I got it!--and LOVED it.  I used white Worcestershire sauce (then called Marinade for Chicken, then discontinued!), then, and we've stopped using the commercial stuff at all, but I decided to try my new recipe for AIP Worcestershire in its place, and it was LUSCIOUS.

Mix liquids and add chicken and garlic, marinate at least 6 hours, then cook in the same sauce till chicken bites are done. Remove chicken and quickly saute' mushrooms in the same pan.

Serve it all over cabbage steaks*, as we did here, or rice or potatoes (if you can do grains and nightshades) or cauliflower rice. Or put in a bowl and go for it!

*I used this recipe for the Worcestershire sauce, and it's as good as the traditional stuff I grew up on! https://www.instinctualwellbeing.com/paleo-aip-worcestershire-sauce/

I wonder if I can figure out how to make a white version!  Or maybe I'll just try this one I just found: https://www.spicealley.com/blogs/recipes/white-wine-worcestershire-sauce
(Of course, without cornstarch...I'll bet tapioca starch would work just as well.  I'll use honey or maple syrup instead of white sugar, too...)

Preheat oven to 400 degrees.  Slice cabbage from the head, about 1/2" thick slabs.  (If it's near the stem, core that out.) Place on a cookie sheet, coat well with olive oil on both sides, salt and pepper both sides, and roast for 15-17 minutes till edges are crispy.  (If you want more crisp, you can stir the steaks areound and put it back in the oven for a while.  YUM.)  We like this just as a simple side dish, as well...
Posted by Kate (Cathy Johnson) at 2:02 PM No comments: 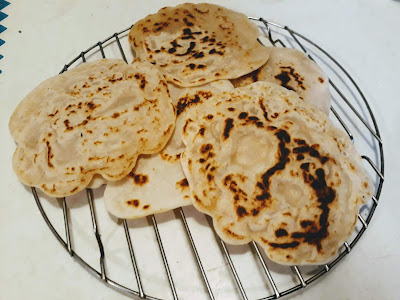 We ended up preferring this recipe for naan to my cauliflower ones...give them a try too!  The arrowroot flour makes them stretchy inside, but that's what naan does, right?

If you like a drier, less strectchy naan, (even crispy!) put them on a baking sheet at 400 degrees for 10 minutes.  YUM.

We've used these as wraps, and even as burrito-like critters.  GOOD.

Posted by Kate (Cathy Johnson) at 1:02 PM No comments: