A Fabulous Sweet Potato...salad-ish something or other! 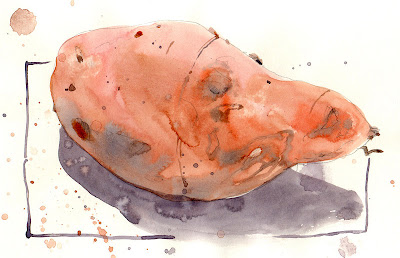 So what do you do when you suddenly find yourself with three of the biggest sweet potatoes you've ever seen in your life?!?

My cousin Keith is a wonderful gardener, and he gave us some of the last of last year's crop--the vines are busily out there making MORE, even as I type!  (And as you noticed from our last post, I've got my OWN garden again this year...with sweet potatoes, along with other goodies...)

Well, coincidentally, one of my favorite blogs, Mark's Daily Apple featured Purple Primal Potato Salad just the other day, and it's Independence Day today but I'm avoiding regular potatoes, so it got me thinking...why not try one out as a salad--ish? (And no, I didn't end up following Mark's recipe at all...I just went wild!)

Keith's aren't purple, but they ARE organically grown and huge--they're crowding my kitchen!

I'm feeling Middle Eastern these days, loving that tangy-spicy-savory flavor, so I made it up as I went along--measurements are strictly approximate, depending on the size of your sweet potato(s) and your appetite.  It tastes like something you might order at the Blue Nile or the, Marrakesh Cafe in Kansas City.

Cool, peel and cube (or cube first and THEN cool till fork tender!)

Stir in 2 dollops of mayo (you know what a dollop is, right?  Bigger than a tablespoon, not so big as a half cup...)

A few shakes of sesame seed oil...this is mostly for the delicous nutty flavor

Add a good teaspoon of  Turkish Seasoning (I like Penzey's, but I also make my own Moroccan mix)--you can add more or less as you like

A good shake of garlic salt, more or less

Salt and pepper to taste

Now, mix all that up.  Add more Turkish Seasoning, cinnamon, garlic salt, whatever you like.

I was tempted to throw in a few raisins, but J. thought that might be a bit much.  I'm thinking some of his home made relish would be good, though...

I wasn't sure he'd like it, but he keeps going back for more tastes!