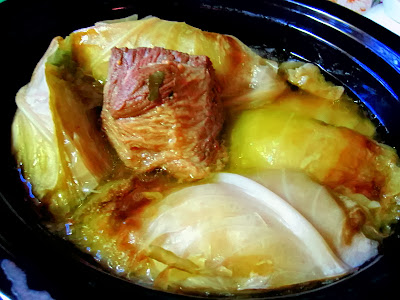 And yes, there was CONSIDERABLY more meat than that, J. just put the cabbage on top to cook in our slow cooker!

I looked through a lot of recipes for home-corning beef brisket, and settled on a variation of Sally Fallon's in Nourishing Traditions...it's really a cultured food, like pickles, in her recipe!

1 large carton plain yogurt with active cultures--not Greek yogurt because it's already strained!
Put several layers of cheesecloth or one clean bandanna or other soft, fine cloth in a strainer, suspend over a bowl, and dump your yogurt in it.  Leave it to drain overnight and voila', basic whey!

(I salt the now-thick yogurt and add garlic or herbs for a spreadable cheese or dip--yummy!)

1 2 or 3 lb. beef brisket--we get grass fed beef from Quarter Ridge Cattle, and it's marvelous--the recipe calls for it to be frozen 14 days and then thawed, I imagine to get rid of any bacteria or bugs?  Fallon doesn't say...but we did it anyway!

I pretty much doubled everything else because you want the brine to cover the meat...and I needed more.  If you just have a small hunk of brisket, plan accordingly.

Mix seasonings (including salt) and rub onto both sides of the meat.  Mix whey and water and pour over meat (and actually I mixed the seasonings into the liquid, which worked fine.)

Cover and marinate at room temp for about 48 hours, give or take, turning the meat several  times a day to make sure the brine reaches everything.  (Some people do this for considerably longer, 10 days or so, and keep the marinating meat in the refrigerator--that works too.)  I used a heavy enameled iron stock pot which let me get at the meat easily and kept the kitties and any other critters out!

The meat looks a big gray after its bath...not to worry, that's what it's supposed to look like.  As long as it smells good, the liquid isn't ropy, and you've turned it often, it should be great.

Apparently Fallon means for this to be eaten raw, since it's in her raw meat appetizers section, but we opted for the more traditional handling.  (Yeah, no thanks...)  SO, the next morning we discarded almost all the brining liquid, reserving the seasonings, put the meat in our slow cooker, and covered it with water and the herbs and spices.*

This is the only recipe I found that called for whey, often used in home pickling, but it sounded like a great idea...so I did it!

We put the lid on and brought it to a boil, then reduced the heat.  2 hours or so before dinner, J. added the big old wedges of white cabbage you see up top.  When that was tender, we dug in, HAPPILY!

*If you use the larger amount of salt some recipes call for, you need to wash off excess salt, and then even discard the cooking water--happily it was fine without doing that!