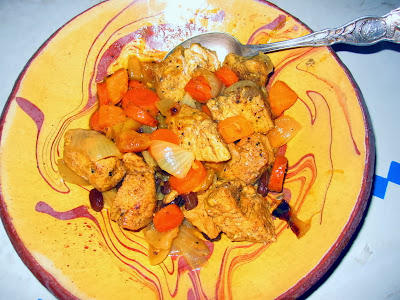 I don't remember whether I discovered Moroccan food on the Mark's Daily Apple site after we got into Paleo/Primal lifestyle, or when we went to the Marrakech Cafe in Kansas City, but at any rate, I'm hooked!  (Marrakech is currently closed, looking for a new location, or I would have included a link!)

At this time of year with fall in the air, these rich, spicy dishes taste especially good.  So here's MY take on:

Make more if you like, these are just guidelines!

Again, you'll want to tweak the spices to your own taste, I do.


An hour or two before cooking (or earlier in the day if you're more organized!), mix oil and spices in a big bowl and stir in chicken chunks.  Leave them alone together to get acquainted.  (And no, most recipes don't seem to call for marinating this way.  No idea why...)

Cut carrots in rounds, onions in chunks, sweet potato in squares.  Slice garlic cloves or use your garlic press.

Put another splash of olive oil in a heavy pan and heat.  I usually start the carrots first, because J. likes them very well done, then add the onions, sweet potatoes, and garlic.  Saute till soft; a wee bit browned is good.

Add extra spices if you like...I put more cumin and pepper in the veggies, plus a sprinkle of cayenne.  I added a tiny bit of water and about a T. of ketchup or tomato sauce for moisture, and put the lid on.

When the vegetables are almost done, heat a heavy skillet and brown the chicken chunks in their own marinade...at this point the smell is delightful!  It took two skillets-full to brown all the chicken...don't get them overdone, just lightly browned--breasts can get really dry.  Ick.

Dump the chicken in with the vegetables along with any leftover marinade, and give them another 10 minutes or so to finish cooking the chicken through.  Again, not TOO long.  Dry chicken, bleh.

You can cook this dish in a traditional Moroccan tagine, which is both the name of the dish and the cooking vessel, but mine is too small...alas!  Tagine--the vessel--is a flat plate-like bowl with a cone-shaped lid, made of pottery.  Very cool...but mine would make enough for one.

Serve as is, over rice or couscous if you're NOT going Primal, and maybe with a side dish of Moroccan cabbage, carrot strings and onions...though I decided enough was enough, tonight!

Granted, this is a pretty starch-and-sweet-heavy dish, so we don't have it too often, but what a TREAT on a chilly, gray evening.

If you DO want the Moroccan vegetables, season with the same cinnamon, turmeric, cumin, salt and black pepper; saute them lightly in sesame oil, then put the lid on till tender...delicious!

Be wildly traditional, serve with sweet mint tea like they do at Marrakech...
Posted by Kate (Cathy Johnson) at 3:36 PM No comments: