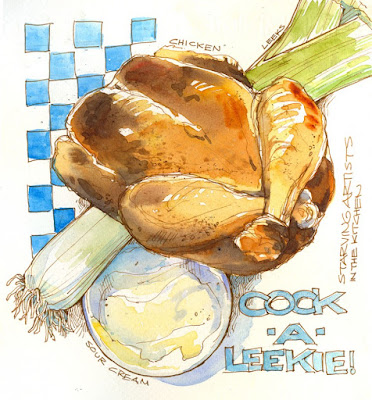 I made Cock-a-Leekie this week, a very old, very simple chicken soup recipe from Scotland (could you tell from the name?) that lets me get the most out of a single chicken–with fresh hot roast chicken and chicken salad as stops along the way, of course. (Cock-a-leekie was mentioned being served at a knight’s table in 1598–THAT is an old recipe!) It’s a great use for some of that wonderful ever-changing soup stock.

(Full disclosure...the original of this entry was from my old Live Journal, katequicksilver, but I've brought it up to date.

Here's Wikipedia's take on the old classic!  http://en.wikipedia.org/wiki/Cock-a-leekie_soup
So, off to the kitchen!  As I believe Jeff Smith, A.K.A. the Frugal Gourmet (R.I.P. and sorely missed!) used to say, “first you take a leek.”

Anyway, actually, first you take a chicken, but I couldn’t resist the old saw.

Some recipes call for potatoes, but we don’t eat many spuds for a variety of reasons; since the Joy of Cooking* didn't include potatoes in their version either, we felt fine about skipping them. (That is still my favorite cookbook, old and tattered though it is! It's been my "kitchen bible" for more years than I care to admit!)

Besides, who needs the starch, carbs, empty calories, and an overabundance of nightshade family members, which my arthritis rather dislikes. (During fried green tomato season, however, I just hurt and to heck with it!) If you do use potatoes, I imagine you already know that most of the nutrients are in and just below the skin...which of course you don’t want to eat if it’s been sunburned. (The skin will be green, if that’s the case. Not good.)

(Whole 30 and the Paleo/Primal crowd used to suggest NO potatoes, but that stand has been softened a bit, so we do eat them on occasion...)

Other variations call for rice or barley, but my simple version is delightful, delicate, traditional, and easy, and we generally do without grains these days and feel much better for it.

We get whole roast chickens at our grocer’s*–they use what they call “Smart Chickens” by which they mean hormone-free, antibiotic-free birds fed on grain–no animal by-products. You can read more about them here: http://www.smartchicken.com/ch.php

Sounds good to me! If you buy a whole bird to roast yourself, it costs about as much, and takes time and fuel. We save a step, and so our first meal is always fresh, hot, juicy roast chicken, as soon as we get home from the store!

If you’ve got a good source of free-range chickens, though, GO for it! Delicious...

(We eat what we want, and pull the largest of the meat off the bones, then simmer the bones in the soup stock, above–5-7 cups of stock. If it’s not strong enough for you, you may give it a boost with one of the commercial stock options, forgive the pun. I like "Better than Bouillon" Chicken Base* , which got the best reviews in the gourmet mag I picked up to read while we were having the truck’s brakes fixed last month. (Please don’t ask the name of the magazine, I don’t remember! Next time the brakes give out, I’ll look...)

I let the bones bubble an hour or so in the stock, then strain them out, let them cool, and pick off the small bits of meat, usually gleaning another cup or so. Return the meat to the pot, along with however much of the larger meat you set aside. Cut to your preferred size–my late husband liked large chunks so he didn’t feel deprived–he grew up just after the Depression; J. likes smaller bits, and so do I. (We saved enough back for chicken salad!)

Leeks are not as cheap as bulk bags of onions (here, about $2.50 for 3 good-sized ones), but oh my they are GOOD. You could substitute scallions or regular onions, of course, but the taste would be a bit stronger.

Cut off the large, tough green end and the roots of 3-6 leeks, then slice the stalk lengthwise. Open the “leaves” and rinse well–they may be sandy. Then cut into short half-moon lengths–like less than 1" long–and add to the pot. 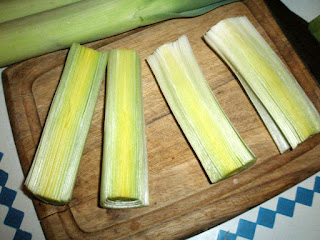 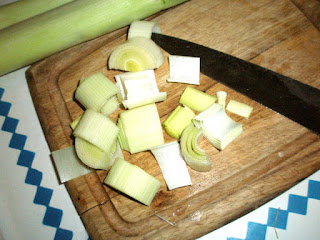 This time I also added celery root and carrots, which made it hearty...

Simmer till tender, then add ½ cup heavy cream (the original recipe), sour cream, or even fat free plain yogurt, if you like (you can make your own–it’s not hard. But we’ll talk about that another time!) I added a bit of fresh ground pepper and sea salt (but skipped the dairy, this time.)

Try it with herbs if you like–they’re not in most recipes I could find and the soup is so wondrously rich and savory it doesn’t need them. I doubt it would have been quite that good without the homemade soup stock.

Historical Note: The traditional recipe calls for the addition of prunes, which I’m going to have to try next time! I love savory fruit-and-meat-and-onion combinations...but by the late 18th C. French gastronome Talleyrand suggested cooking the prunes in the broth but removing them before serving. Whatever!

Some of the green part of the leeks will be just too tough for soup...but you can simmer them with the chicken bones (yes, again!) to add to your stock pot. What’s left–except the bones–can go onto the compost heap along with the really tough part of the leek tops and the roots.

*For speed and convenience, last night I used organic chicken breasts from Costco, which tasted just fine!
Posted by Kate (Cathy Johnson) at 7:31 AM No comments:

I was in the mood to cook, tonight, and had picked up some artichokes at Sprouts the other day...so wild experimentation transpired! 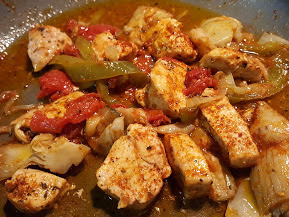 2 chicken breasts...organic if you can find them.  (We get them at Costco)
1/2 onion (more if you like), sliced
1/4 green pepper, cut in strips
1 C. artichokes (a jar or from the deli)--pickled, anyway
1/2 can of organic fire-roasted diced tomatoes
Salt and pepper or Pepperman
Tandoori spice--we have Penzey's blend

Cut up vegetables and saute' in olive oil until tender and onions are transparent--tomatoes and artichokes can be added later.

In a separate pan, saute' cubed chicken breast in olive oil, season with salt and pepper to taste.  Sprinkle GENEROUSLY with Tandoori spice--taste as you go, if you like, but I like kind of a lot.

Serve over rice or cauliflower rice, or just pile in a bowl, as we did!

Traditionally, Tandoori Chicken is whole pieces...Seva; a Taste of India (one of our favorite restaurants) serves drumsticks that are gorgeous, tender and juicy...but I wanted vegetables, too... 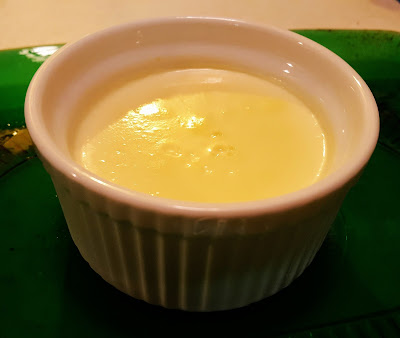 A posset is about the simplest custard you can make, with only 3 ingredients...easier than creme brule or flan or even grandma's custard pudding, and OH so good.  It's creamier and lighter than lemon curd or lemon meringue pie...but definitely my favorite.

Easy--but so tempting we only allow ourselves to have it about once a month, it IS rich!

But try not to worry about the fat content...recent nutritional research has calmed that bugaboo a LOT, realizing the good fats are GOOD for us. Your body--and your brain--appreciates good fats. Not margarine or poly-unsaturated over processed vegetable oils, of course, but butter, cream, olive oil and others, preferably organic, rock!  Google "good fats" if you need convincing...

Posset is an ancient recipe, going back hundreds of years, in a variety of forms.

OUR favorite is scientific magic.  Cream, sugar, and lemon juice, that's it.  Give it a try!

2 C. heavy cream (we buy organic whipping cream, but if you have a source fresh from the farm, go for it!)
1/2 to 2/3 C. sugar (we get organic sugar, too...and yep, sugar's only an occasional treat, hence the attempt at self-control...)
5 T. lemon juice

Put cream and sugar in a deep, heavy saucepan and heat to boiling, but don't let it boil over!  Keep stirring constantly.  (If it appears to want to boil over, blow on the surface!)  Simmer for 5 minutes.

Most recipes call for 2/3 C. sugar, but I used 1/3 C. this time and it was still perfect, just not quite as madly sweet.

Remove from heat, then stir in lemon juice.  I usually use fresh-squeezed, but once when I discovered my lemon had gone bad I used a commercial lemon juice I picked up at Green Acres.  Whole Foods, Trader Joe's, Thrive, Sprouts or similar probably has something comparable.  It still worked, but the bottled stuff made for a stronger lemon flavor and a little more bite. 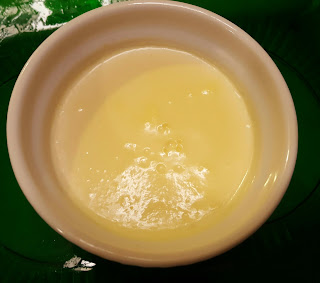 Allow to cool 15 minutes, then pour into 4 little ramekins or small glass bowls (or old fashioned coffee cups, or pretty tea cups) and then chill in the refrigerator for several hours...it will set up perfectly, the magic interaction of the boiled cream and lemon juice.

You can get fancy and add lemon or orange zest or other flavorings, or top with unsweetened whipped cream or fresh berries, but so far I haven't been tempted--it's wonderful just exactly as it is.
Posted by Kate (Cathy Johnson) at 5:02 PM No comments: