As part of our mostly-Primal lifestyle (hey, nobody's perfect!), I’m subscribed to “It’s Paleo” which, among other things sends me a daily Paleo-inspired recipe. One of these was a recipe for Ribeye a la Oscar, which, instead of Hollandaise, called for Sriracha-enhanced sour cream. Primal/Paleo is supposed to be completely without dairy, and granted Hollandaise has butter which is also dairy, but there’s a lot less of it.

Anyway, I decided that one thing this recipe did have right is a bigger piece of meat than the little (albeit tasty) filet Mignon which is called for in the original Filet Oscar recipe. I opted for KC strips. So here’s my first attempt at KC Strip Oscar.

And yes, given the size of the steaks, we had leftovers. 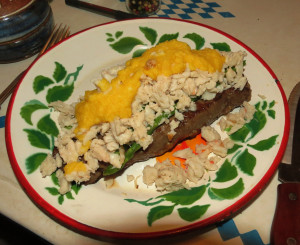 Trim the asparagus by bending in half until it breaks and discard the lower half.

Boil asparagus in salted water, 2 minutes for al dente, longer if you like it softer, which we do.

Make the Hollandaise and set aside someplace warm. (I just turn off the heat, add a little cold water to the lower pan to reduce the heat further, and cover.)

Grill the steaks to desired doneness. For us, this takes almost no time at all, we like our meat that rare.

Turn your broiler on high. (I use a toaster oven.)

Place each steak on its serving plate, top with four asparagus spears followed by the lump crab meat.

Pour half of the Hollandaise on top of each steak.

Place in the top shelf of the broiler. Do not close the oven, and watch them closely. Remove as soon as the Hollandaise begins to just bubble. Needless to say, the plates will be hot.

Melt butter in a saucepan over low heat – do not let it boil.

Whisk the egg yolks, lemon juice and salt in the top pan of a double boiler while bringing water to a boil in the lower pan.

Lower the heat to low and let the boiling subside somewhat. Place the upper pan over the boiling water and whisk the mixture rapidly and continually, being careful not to actually cook the eggs. As you can see from the picture, I started off with just a bit too much heat so the sauce got a bit granular. Still tasted good though. Julia Child has a recipe for Hollandaise made in a blender. I may give that a try next time.

Once the yolks begin to thicken, SLOWLY add the melted butter. This should take a couple of minutes: too fast and the sauce won't thicken. Once all the butter is added, add the dash of hot sauce and remove from heat.